Jan Pieterzoon LOUW was born on 1 March 1628 in Caspel-ter-Mare in Holland. He was baptised at Bovenkarspel on 29 October 1628. He came to SA presumably on the ship Gecroondes Leeuw on 16 Dec 1659, while Jan van Riebeeck was still Commander at the Cape. Jan, a mechanic by trade, did not seem to have felt at ease working for the Honourable Company, for he quickly applied for the grant of land at Rondebosch.

At the time only 12 of the 23 burghers who had applied in the 3 years prior to him, still remained on their farms. Many had suffered so through trade restrictions, livestock sickness, the constant menace of lions, leopards and hyenas, and especially the dangers of marauding Hottentots, aggrevated by the first Hottentot war, that they had just given up and left.

Jan accepted the challenge though, and on 15 Jan, 1660 he became another 'free burgher", after being granted half of a large farm of 40 morgen next to the Liesbeek river, which he named 'Louwvliet'. It was situated between False Bay and Table Bay, behind Table Mountain. He was bound by contract to cultivate it for 14 years. In fact, he was eventually the only free farmer of van Riebeeck's era who actually remained on his farm for the required period.

Jan discovered that of Louwvliet's 40 morgen only 25 were arable, implements were scarce, and few cattle were left after raids by the Hottentots. However, it was the second largest farm along the river ("vliet"), wonderfully sheltered from the full force of the wind - and with a magnificent view of Table Mountain…and so he stayed. By 1663 he was already one of the most productive grain farmers (wheat, barley and rye). And within a decade Jan's vineyard became one of the largest along the Liesbeek River. 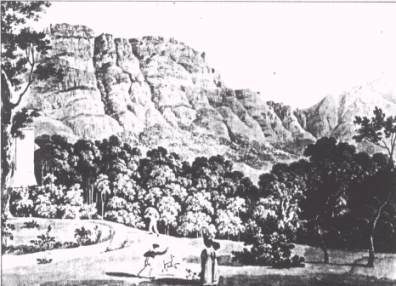 View of Table Mountain and Devil's Peak from Louwvliet,
with the Liesbeek river in the foreground

In Sept 1660 he acquired the other half of Louwvliet, and in 1662 he bought the very large 60 morgen farm Questenburg, south of Louwvliet. Jan Pietersz developed these 2 farms (100 morgen) as one property for the rest of his life, and they remained in his family for 32 years after his death, until 1723.

The lovely Liesbeek river valley had an abundant water supply in the lee of the Wintberg (Devil's Peak) and Table Mountain. At that time the valley was a densely wooded area with lush vegetation interspersed with lakes and streams. The banks of the Liesbeek were covered with shrubs, reeds, ferns, brambles and arum lilies, and the adjacent forest on the slopes of the mountain was so dense that no opening could be found except for the wagon road made for the freemen. There were trees of such great size and height, that one could get thousands of complete masts for ships from them. The Liesbeek was deep but fordable in parts, and beyond the banks there were innumerable species of flora including many varieties of Protea on the mountain slopes, and blue and red Disas in the ravines - a veritable Garden of Eden.

Game abounded and harts, hinds, small roe, eland, hares and other game were seen daily. On the plains there were large herds of antelope, zebra and wildebeeste, while in the woods warthogs, porcupines and other small animals hid in the undergrowth. Elephants and rhinoceri were about and hippopotami disported themselves in the streams and marshes. But there were also numerous predators - lions, leopards, wild cats and hyenas - as well as barking baboons on the dins of the mountain and chattering monkeys in the trees. Ostriches were plentiful while geese, duck, partridges, snipe, herons, egrets and flamingoes were daily visitors to the marshes. Owls hooted at night and birdsong welcomed the break of day.

Jan Pietersz soon acquired the nickname 'Broertje'. Of great interest is the complete omission of the sumame 'Louw' on official documents until 1689.

When the ship De Jonge Prins arrived from Hoorn on 15 Aug 1661, Beatrix WEIJMAN (occasionally spelt Weijnand), a young girl from Utrecht who was to become Jan Pietersz's bride, was on board. Beatrix was born 1639, and died July 1722 on the farm Louwvliet. They were married 8 days later on 23 Aug 1661, in the Fort hall. This marked the beginning of a wonderful partnership which was to last until Jan Pietersz's death 30 years later.

The year 1666 saw the departure of several more farmers who could not make a living. Jan however was doing so well that he decided in 1667 to buy Rouwkoop, adjoining Louwvliet and Questenburg, as well. The 3 farms covered 113 morgen on the eastern banks of the Liesbeek River. In 1670 Jan was however forced to settle a debt by transferring Rouwkoop to a Saldanha trader.

Jan Pietersz died at Louwvliet 9 May 1691 (MOOC 8/1-10), as indicated by his absence from the muster roll. No record of illness or accident to account for 'Broertje's' death, aged 63, could be found. Presumably he died unexpectedly, since he did not seem to have had time to draw up a will. He was a gentle soul, and must have been deeply mourned by his family and good friends. When he died he was essentially a wine farmer, known as Jan Louw, a respected citizen who, although not wealthy, had lived well.