ALFRED GUSTAFSON, * c1850[DN] / 1853 on birth certificate in Högsby i Kalmar län in the south of Sweden, †19th December 1903 in Witrand Potchefstroom [Died aged only 53yrs according DN [which was only lodged 1906 ] but 50 according Birth Certificate, occupation- Wheelright and farmer. 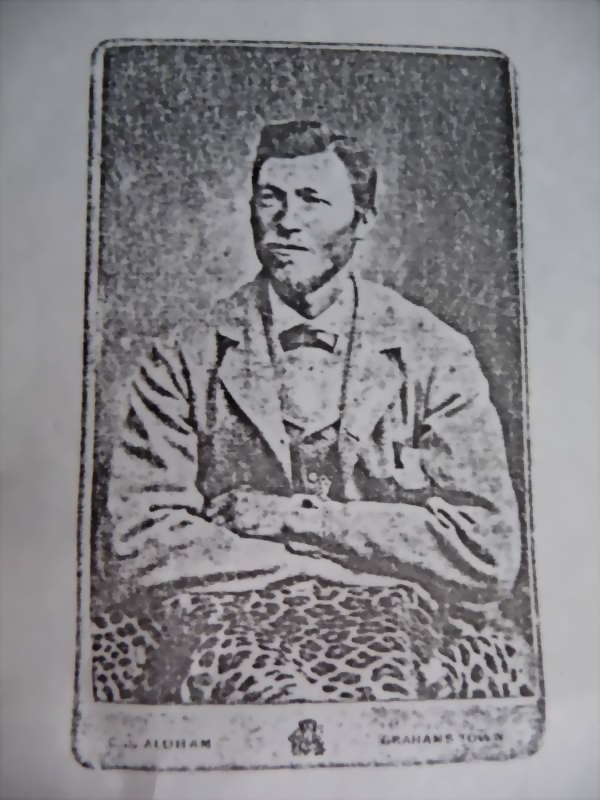 ALFRED is the progenitor [Stamvader] of the GUSTAFSON'S in South Africa.[s/o PARENTS: GUSTAF  FREDERIK, *  1817 in Sweden, †1861 in Sweden.
Originally the surname was GUSTAFS, so the son became GUSTAFSSon...which then through the years became  GUSTAFSON with only one "S".

Of their 9 children only Alfred came to South Africa

His Birth Certificate gives his date as 1853 but his DN says he died at age 53 in 1903 making his birthdate 1850.  Seeing that the DN was only lodged in 1906 this may have been the cause for incorrect information.
He was the 8th out of nine children. When his father Gustav Fredrik (1817-1861) died at the age of 43 the whole family  moved to Stockholm and some of them settled in the archipelago outside of Stockholm.

Alfred served as a boatsman in the Swedish navy. It is our belief that he deserted when he went to South Africa around 1880.The only address his family had for him was: "Geluk Rooijakkalsfountain, District Lichtenburg" and a photo taken in Grahamstown.

Alfred's Will in his Estate Documents was drawn up on 19th March 1888 in which he appoints his children and still to be born children as executor of his estate.. It does not seem to have been revised. It seems he farmed at "Kareebosch" district Hopetown, then moved to the farm "Doornhoek" in Zeerust district where, when he was on commando they were sent to the Mafeking Concentration Camp in the Anglo Boer War.
He arrived in the camp on 13th May 1901 and his wife and 7 children on 26th August 1901 in tent 11FC. 4 children all died in the October from measles/pneumonia/meningitis due to the atrocious situation in the camps . After this it seems that he farmed in the Lichtenburg district and retired to Witrand, Potchefstroom where he passed away.

In TAB CJC vol 272 Ref 901 he applied for claim for compensation but it was rejected on the grounds of him not being a South African Burger and also the British Government thought he was cashing in on it.....which was ridiculous as he also suffered significant losses.
x in Phillipstown Cape Province, MARTHA MARGARETHA RETIEF ROOS, * about 1870 in Cape Province, †09th Oct 1952 on the farm "Visgat" Vereeniging [She was a widow when she died aged 82 yrs 6mnths. Only 5 children are mentioned on her DN . The son VICTOR who is mentioned on the fathers DN is not mentioned on her DN so he had most probably passed away before she did.].

MARTHA: So many mothers lost their young children due to illnesses and the appalling state of the concentration camps. How difficult it must have been for them to see their children growing weaker and there was nothing they could do. How did they come to terms with their grief?

After her husband's death she remarried Mattheus Nicholaas VAN NIEUWENHUIZEN and had her 10th child, a son.[the only child from her second marriage] Her second husband, who † 24th March 1945 aged 64 yrs, and her daughter-in-law's father were brothers. The farm "VISCHGAT" belonged to the van Nieuwenhuizen family.
Mattheus was the s/o Hendrik van Nieuwenhuizen and P.H.M.Meyer.
After his death Martha stayed on the farm until her death and her son b4 ALFRED EDIVAN [Edward] GUSTAFSON seemed to have helped with the farming as the farm was inherited by her son b10 Mattheus van Nieuwenhuizen.

b9 ANNA SELOTHA [CHARLOTTE] GUSTAFSON *c 1904 In 2009
[c4] Aunt Martha Magdalena Gustafson [x George MacDONALD] said that she was not a child of Alfred but she is however mentioned on the death notice as well as in the estate of MARTHA MARGARETHA RETIEF born ROOS [x ALFRED GUSTAFSON xx MATTHEUS NICOLAAS van NIEUWENHUIZEN] TAB 286 but not on her fathers' DN.[ she was probably born after her father died]
x THOMPSON

Compiled and researched by:
Annatjie Tiran This email address is being protected from spambots. You need JavaScript enabled to view it. 2014