The parish of Clontuskert is situated on the eastern edge of County Galway in the West of Ireland. Clontuskert is divided into its sixty-four townlands. Glenloughaun is a townland of almost 300 acres. The Tithe Applotment Books show that there were fifteen tithe payers in 1823. The people named were James Brown, Thomas, William and Frank Elliot, James Reddy, James Todd, James Rorke and another James Rorke who was a policeman along with seven Stenson families.

By 1856, Lord Clancarty was the owner of the townland and he let the lands and thirteen houses to his tenants. According to Griffith’s Valuation, the tenants were Robert Sinclair, William Sale, John Rorke (the eldest son of James), Thomas McNamara, James Johnston, Gilbert Johnston, James Walshe Jnr., Elizabeth Johnston, Ann Sale, Mary Brown, Andrew Stenson, James Walshe, and James Naughton.

The changes in the occupiers of lands after that were as follows: William Sale’s house and land were taken over by George Cooke in 1873 and John Rorke’s by Edward Hall.

James Rorke was buried in the grounds of St Matthew's Church, Glenloughan, near Ballinasloe, Galway. The grave is still there today and the inscription is readable.

b2. THOMAS RORKE (b.1795 d.29 Jan 1837) Thomas came to South Africa with his brothers as single men in 1823. He married Elizabeth in South Africa. They had 2 children: Mary Anne RORKE and Catherine RORKE. 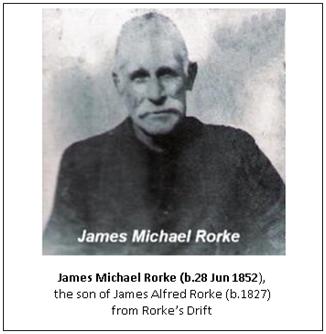 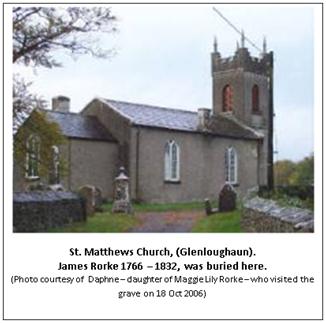 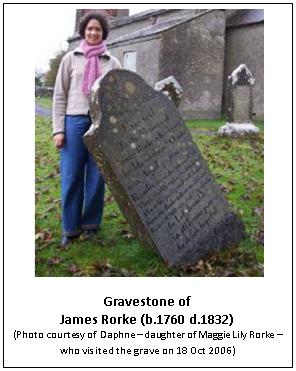 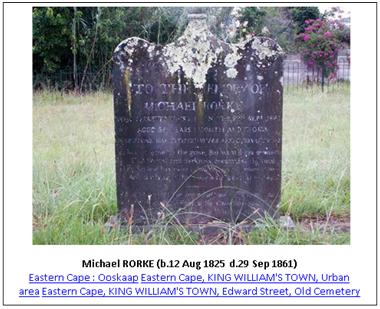