There has been much controversy for over 2 centuries regarding the origin of stamvader Adolph Jonker.

Since the late 18th century Adolph Jonker has been mentioned by numerous authors and several theories emerged, but all without conclusive evidence to back them up fully:

• 1772: Naturalist Sparrman indicated Adolph was of mixed race, his mother being non-European
• 1902-1954: Historians Colenbrander, Moritz and Redelinghuys indicated that Adolph was of German descent
• 1958: Genealogist dr. J Hoge1 unleashed much controversy by claiming that Adolph was the son of free slaves Jonker van Makassar and Rosetta van Java. His cited documents indicated that he also believed Jonker van Makassar to have been the same person as banned Prince Catchiri Daijman Mamoedi from Ternate (aka Ketees Malocco). No explanation for this conclusion was given however
• 1965-6: Dr A.H. Jonker2 and dr. C. Pama supports German descent
• 1959-1986: Malherbe3 (1959) and Heese & Lombard4 (1986) support Jonker van Makassar as Adolph’s father
• 2013: Mansell Upham5 supports dr. Hoge’s 1958 claims

The researchers approached two male descendants of Adolph Jonker who agreed to join Jaco’s Cape Dutch Y-DNA Stamvader Project7 and have their Y-DNA tested in support of Jaco and Martina’s archive research. One of them is Martina Louw’s cousin Hennie Jonker, and the other dr. Koos Jonker, half-brother of poet Ingrid Jonker, and son of dr A.H. Jonker2. Their Y-DNA identified the haplogroup of their common patrilineal ancestor Adolph Jonker as well as the male ancestors before him in this direct line. Results showed that they both belong to a very rare subhaplogroup of haplogroup K that originated in south-east Asia.

Adolph Jonker is thus the first Afrikaner stamvader whose non-European patrilineal roots have been confirmed by Y-DNA analysis.
More information about haplogrop K and other Y-DNA haplogroups, as well as a graphic representation of their spread throughout the world can be found at DNAeXplained8 - as illustrated by this map: 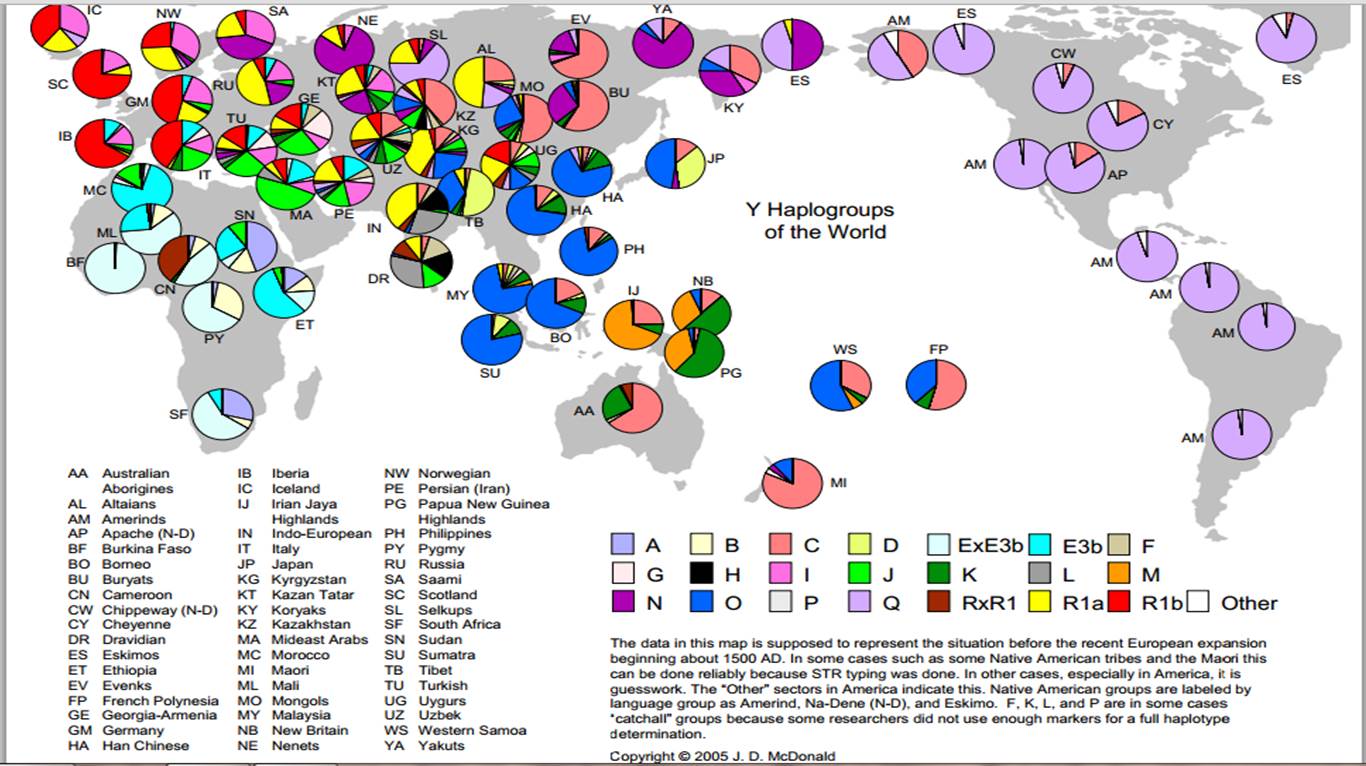 Rigorous archive research also established conclusively that his parents were indeed the free slaves Jonker van Makassar and Rosetta van Java, but that Jonker van Makassar was definitely not the same person as the banned Indonesian Prince Catchiri Daijman Mamoedi from Ternate (aka Ketees Malocco). They were indeed different people with very different values and lifestyles, as illustrated in this table: 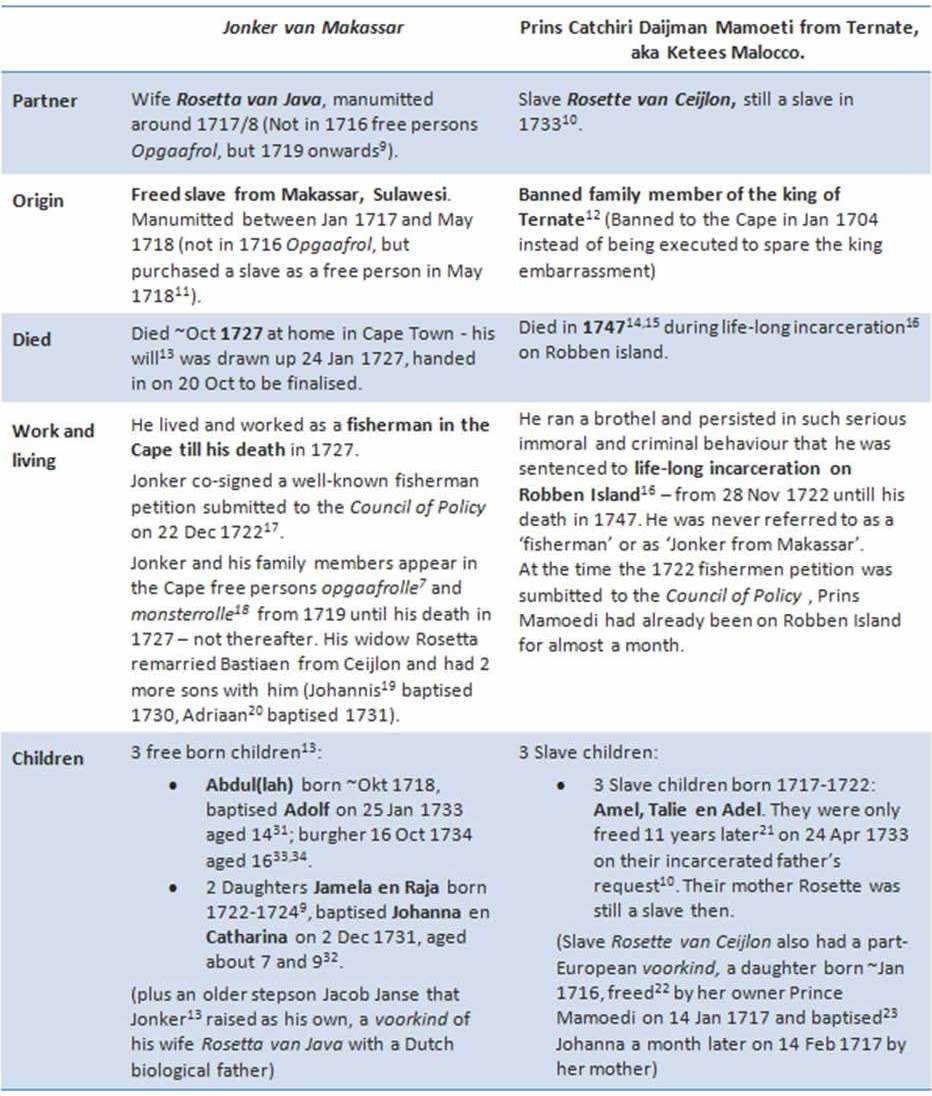 It could not be established with certainty when Jonker van Makassar and Rosetta van Java came to the Cape. We do know that Jonker required a Portuguese-Dutch translator in order to draw up his will. This is not surprising since Makassar in Sulawesi had been a major Portuguese trade centre until the Dutch took over in 1667 and families (many of nobility) heavily involved in Portuguese trade, had to flee or were forcibly relocated to other parts in the Dutch empire24.

Considering that he was called “Jonker” which was a Dutch form of address for a nobleman or son of a nobleman25, it is quite possible that Jonker’s family could have suffered this fate, resulting in him eventually being enslaved and taken to the Cape. This is of course speculation.

While most freeblacks were very poor26, soon after being manumitted Jonker was able to own a fishing boat and purchase slaves of his own. In his 1727 estate he left 4 slaves to serve his family members. He was without doubt very hardworking, but his business acumen, ambition and will to improve his family’s lifestyle could perhaps also be an indication of a privileged prior life.

Adolph Jonker was the eldest child of free slave muslim fisherman Jonker van Makassar and his wife Rosetta van Java, and would have been known as Abdul(lah) for the first 14 years of his life. He would have attended the Cape school in which Adolph Hofman30 was appointed teacher in 1723. It seems as if Adolph Jonker was a bright pupil and Adolph Hofman an inspiring teacher and mentor, considering Adolph Jonker’s later choice of career – teacher and koster of the Drakenstein congregation. He may even have been named after his teacher and mentor when baptised in 173331.

Adolph’s life was not without sadness, he lost his father Jonker van Makassar at the tender age of 913, and 4 years later aged 13 he also lost his mother Rosetta van Java9.

Six years later on 26 June 1740, Adolph married35 Maria Petronella Langeveld, daughter of Pieter Pietersz Langeveld and Cornelia Jacobs. They had 10 children, all but the first born baptized in Drakenstein where Adolph was appointed teacher and koster on 20 June 174536.

The children were named after family members, close friends and significant people in their lives, often signing witness to the baptisms. These baptismal records expose the close bonds that continued to exist between Adolph and various friends and family members, including his older half-brother Jacob Jansz, his sisters Johanna and Catharina Jonker, his younger half-brothers Johannes and Adriaan Bastiaans, and his step-parents Arij Bastiaans and Pieternella van die Kust(Kaap)– as illustrated in this table: 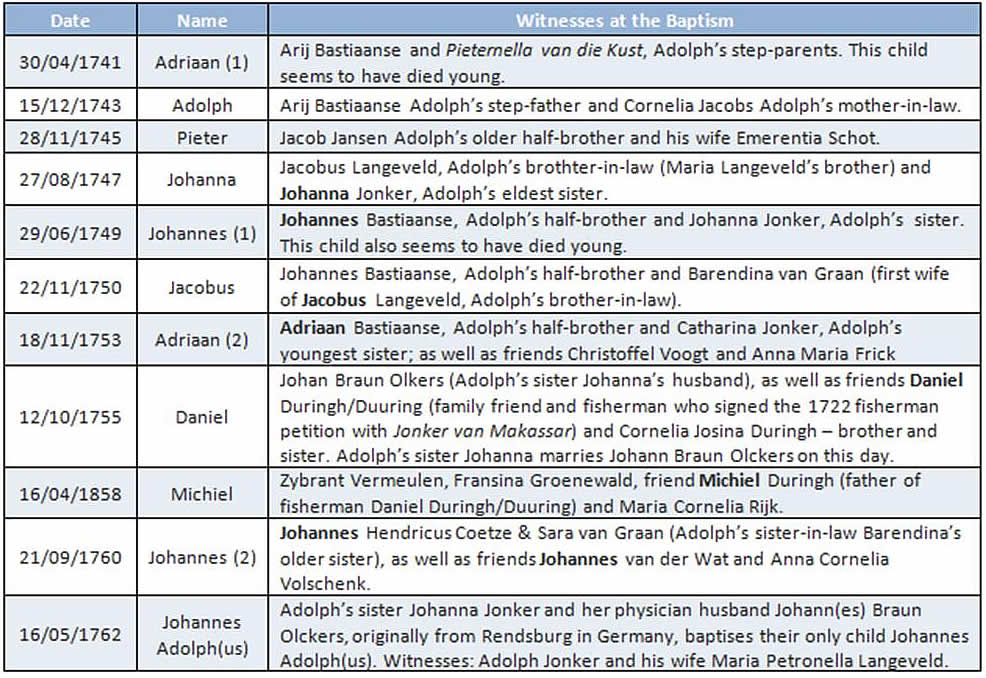 We do not know what Adolph Jonker did for a living between 1734 and 1745, but he was allowed to wear a sword which was a rare privilege at the time, and used a wax seal with strong Germanic traits to seal important documents. There is a wax impression of Adolph’s seal as used on 20.2.1753 in the Government Archives in Cape Town - seen in the photo below: 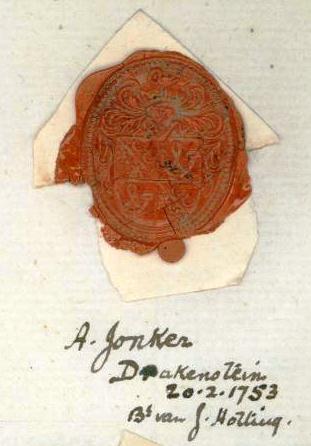 Adolph retired as teacher in Drakenstein after nearly 17 years on 5 May 1762. Apparently few teachers held their positions this long in those days. It seems he gave up teaching in order to become a farmer on pieces of land he had purchased37. At the time of his death he owned 130 goats, 15 cattle and a horse. He continued to be koster until his death in 177938.

Adolph was fluent in Dutch and German, and was also well-read. Although books were scarce in those days, he owned 20 on a variety of subjects, as well as 2 bibles. By all accounts he was an excellent teacher, a loyal friend and a dedicated familyman. In spite of his lowly freeblack background, he became a respected member of the Cape community and progenitor of the South African JONKER family.

Adolph Jonker is the first Afrikaner stamvader whose non-European (Indonesian) patrilineal roots have been established by archival research and confirmed by Y-DNA analysis.

Since traditionally South African Stamvaders are considered to be the first known male progenitor in each patrilineal line that settled at the Cape. Now that it has been established with certainty that Adolph Jonker’s father was Jonker van Makassar, it is expected that Jonker van Makassar will carry the title of Jonker Stamvader in future.