Origins and Arrival at the Cape
Philip MORKEL (*1677 Hamburg, Germany) arrived at the Cape in 1708 on the ship Oosterstyn returning from the East to Holland. He was a "Constapel" (gunner or artillerist) and continued with at least one further voyage when he returned to the Cape on the Noordbeeck as chief gunner. He was also listed as an artillerist at the Castle in 1709, and received his burgher rights on 28 November 1709.

When Philip arrived at the Cape on the Oosterstyn, he married Maria BIEBOW aged 16. A daughter, Elizabeth was born in 1710 but Maria did not live long after that. On 17 September 1713, Philip married Catharina PASMAN, daughter of Rudolf Pasman and Sophia Schalk van der Merwe.

The family settled in 1713 on the farm Onverwacht in the Hottentots Holland valley (now Somerset West, about 50kms from Cape Town). The owners of the farm, Claas Elbertsz and Catharina's elder sister, Margaretha Pasman died the smallpox epidemic of 1713 and it passed on to Margaretha's mother, Sophia Pasman. In 1718 it was transferred to Philip. Until the town was established in 1819, the farm was often an overnight stop-over for travellers before tackling the pass over the Hottentots Holland mountains to the interior (Overberg). The Morkel family remained on the farm until the 1990's by when most of it had been absorbed by urban sprawl.

Philip's brother, Willem also came to the Cape. He was a chief surgeon on various VOC vessels, including the Meyden (1711), Groenswaard (1718) and Westerdyxhoorn (1721). He is described as "aleenlopend" (single), leaving no descendants and his domicilium was with Philip at Onverwacht.

The Church Window Pane
An oval window pane with the inscription Philip Morkel, Heemraat, Anno 1723 has survived. It is from an original set of 17 that were centre pieces of larger leadlight windows fitted to the Church of Stellenbosch built during the early 1720's. A member of the family rescued two of the panes when the church was demolished in 1862. One was of Philip shown below and the other of his sister-in-law, Sibella Pasman, displayed under Rudolf Pasman on this website. 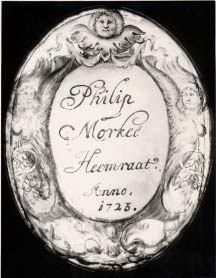 The Wreck of the "Schoonenburg" and Liefde-krans
On 20 November 1722, the ship "Schoonenburg" was wrecked about 4 miles east of Cape Agulhas, the southern most tip of Africa. The crew made their way to the close shore but according to reports heavy seas precluded salvaging the ship. The masts had washed overboard and the whole of the afterpart had broken away. The skipper tried to salvage some of the provisions but "5 to 6 men had ill-used and robbed him". When locals from the Cape arrived, the crew had drank the liquor and smashed much of the ship.

Eighty-five survivors struggled through the wild bush and mountains (as the crow flies, about 80 to 100 kms) and was housed on the first farm along the way, which was Onverwacht. Philip's single brother, Willem was also at the farm and the two brothers hosted the survivors. On their return to Holland, one of them, Ab van Mommen, wrote an epic poem, "liefde-krans" (lit. a wreath of love) about the event, expressing gratitude to Philip and Willem. It was printed in Amsterdam in 1725. While the poem is sprinkled with allegories to Greek mythology and biblical references, the relevant parts can be translated as follows:

This Flip Morkel recently proved his love in his treatment of the shipwrecked people, steeped in misery of the East India ship Schonenberg. They by ill-fortune came to be cast ashore , alas to their sorrow on the coast of Anguilhas (sic) …… Whence eighty-five men, trusting in God's pity wandered through the wilds of Africa …….A hippopotamus was killed and gave food for their bodies. Thereafter in three days they found succour in Hottentots Holland, at the hands of Morkel. This man gave lavishly to all that sorry company. O Noble Deed! Translated by M.K. Jeffreys.

The poem relates that Willem would have empathized with the survivors as he had also been in a shipwreck, that of the Arion while in the East Indies (off the coast of Maxima). 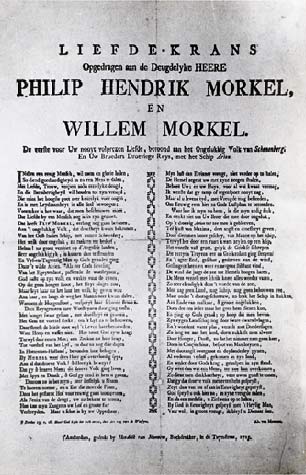 Children
Philip Morkel had three children, two daughters and one son Willem, who in turn had four sons (and 6 daughters, of whom two grew up and married). Thus by 1808, a hundred years after Philip first settled at the Cape, there were only four families (grandsons of the original Philip) using the Morkel surname. Three lived on contiguous farms, Philip at Morgenster, Willem at Voorburg and Daniel at Onverwacht, bordering Somerset West. The fourth son, Hercules farmed at Welgelegen in the same district and his descendants moved over the mountain to the Riviersonderend district.

Philip Morkel's signature from a letter stating that the neighbouring loan farm of Claudina Lombaar,
widow of David du Buisson was of no hindrance to him.
Source: P.W. Morkel, The Morkels, Family History.

Signatures from a Bill of Debt (Skuldbewys) to E.K. Green for the Somerset West Church Organ.
The three Morkel brothers, Philip, Willem and Daniel together with
M.W. Theunissen from the farm Vergelegen (and father-in-law of Daniel's son),
were the "Voorstanders" who petitioned the Governor of the Cape Colony, Lord Charles Somerset,
to establish the town of Somerset West They also sponsored the founding of the Church.
Source: H.C. Hopkins. Nederduitse Gereformeerde Gemeente. Somerset Wes 1819 - 1969.

Morkel origins in Germany.
Efforts to trace Philip and Willem's ancestry in Hamburg in Germany have not been successful. To date no evidence of the family name could be found in the Hamburg church archives of the time. A broader search of the family name yielded about 50 Morkel families in Germany with "hotspots" in Butzbach, about 50 km north of Frankfurt, and the Brachttal area - a number of small towns about 70 kms north east of Frankfurt. The Morkel family name was traced back to previous spellings of Markholt, (keeper of the market) Markel, and Morkel, back to 1383. In this reference, the name changed from Markel to Morkel with Emmerich Morkel who is mentioned as a young man in 1520, and was mayor of Butzbach in 1535, 1548 and 1554. Subsequent spellings also included Morckel. Whether there are any connections between these families and Philip could not be established.